In a state with a population of nearly 7 million residents, there are currently only four children diagnosed with Pitt Hopkins Syndrome in Arizona. Matt, Alexandra and I have had the great fortune to have met each of these amazing children and their families — and on multiple occasions too! This year we have exciting news to announce… Governor Ducey has officially proclaimed September 18th as Pitt Hopkins Syndrome Awareness Day in Arizona! We are beyond thrilled that his office accepted our proclamation proposal and that he understands the importance of raising awareness for this incredibly rare disease.

The Pitt Hopkins Research Foundation annually celebrates September 18th as International Pitt Hopkins Syndrome Awareness Day to raise awareness and funding for research and this date was chosen to bring attention to the fact that it is a disorder caused by a spontaneous mutation on the 18th chromosome. 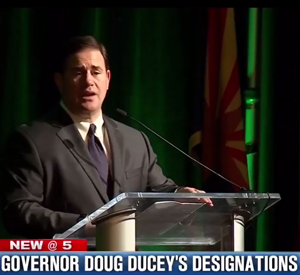 Arizona joins several other states that have also successfully proclaimed September 18th as the official day for PTHS awareness, they include: Alabama, Florida, Illinois, Iowa, Missouri, New Jersey (Township of Mantua), Pennsylvania and Texas. Congratulations on achieving this historical milestone! As of the date of publication, the following states are in the process of finalizing their proclamation request: Colorado, Connecticut, Georgia, Michigan, Minnesota, North Carolina, Ohio and Orangeville-Ontario, Canada.

You can find the Governor’s full proclamation below:

WHEREAS, Pitt Hopkins Syndrome is a rare and severe neurological disorder caused by a spontaneous mutation or deletion of the TCF4 gene; and

WHEREAS, approximately 700 people worldwide have been diagnosed with Pitt Hopkins Syndrome,

WHEREAS, The Pitt Hopkins Research Foundation annually celebrates September 18th as International Pitt Hopkins Syndrome Awareness Day to raise awareness for Pitt Hopkins research, and this date was chosen to bring attention to the fact that it is a disorder caused by a spontaneous mutation or deletion of the TCF4 gene, located on the 18th chromosome; and

WHEREAS, The Pitt Hopkins Research Foundation is dedicated to finding a cure for Pitt Hopkins Syndrome through research, education and advocacy.

For those that have not joined her Pitt Crew, we ask that you reconsider. Alexandra and her Pitt “brothers and sisters” around the world need your help. There is no cure for Pitt Hopkins. The effects of this disorder are devastating. Can you imagine life without ever speaking? Never being able to say you love someone? Or never hearing your child say she loves YOU? I can’t imagine it, but we will soon. This is our baby girl’s future that she faces. But with your help, a cure is possible. I just know it. Help us fund a cure. Please help us go #beyondawareness and donate today. 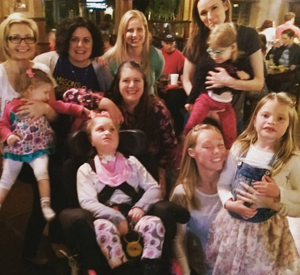 The Arizona Pitt Hopkins kids catch up at one of their “Pitt Party” gatherings. Also joining in the fun were two Pitt mamas from Utah and Kansas! About the Pitt Hopkins Research Foundation

The mission of the Pitt Hopkins Research Foundation (PHRF) is to support research dedicated to finding a treatment, and an eventual cure of Pitt Hopkins Syndrome (PTHS) and other similar disorders. The PHRF is also dedicated to supporting the PTHS community with resource recommendations, parental support and the latest medical information.