As some of you may know, Matt and I met because of a shared love of music and performance. Back in high school, when I was a freshman and he was a senior we became friends since we both played in our school’s marching band. My friends were his friends and vise versa and our little group formed a friendship that we knew would last. Not only did band bring our lives together, it also taught us so much about life, perseverance and following your passion. Our marching band was really good. Over the course of my four years, we repeatedly took “Superior” rankings (many years also with “distinctions”) at State competitions. Music was my art, marching was my sport, performing was my passion. I loved marching and all that it helped teach me.

One of the dreams I had for Alexandra – when we first learned we were expecting – was that perhaps she would also have a love for music and playing an instrument. I mean, heck, Matt played drums, I played saxophone, many in his family also sing and perform… musical talent literally runs through her veins.

All of that though…came to a screeching halt when we learned of her unique diagnosis. How doing simple tasks in life would prove to be a challenge, never mind playing an instrument AND marching at the same time. I was shattered. Something I so desperately wanted her to be able to find a passion for or at least appreciate would probably never be a cognitive thought to enter her mind.

As many of you have followed our journey over these past months, I know you can start to see the progress that she has been making. However, without a cure the chances of her marching (in the literal and most obvious sense) will honestly, most likely never happen. Instead we are finding ways to reshape the dreams we have for her, to mold our new reality to be something that fulfills her life – and heart – to the fullest.

The other day, walking through the store, I found myself in the toy section. Alexandra has a million toys, but for whatever reason, I continue to buy her things. I suppose it is fueled by a desire to eventually find that one toy that she loves and masters and lights up her world. Buying toys for a 2-year-old with significant motor and cognitive delays is not a fun process. Most of the toys for her age group are not developmentally appropriate for her. Instead my eyes land on toys that often say “0-9 mos” on the package. As those toys light up, play music and are easier for her to grasp. Those toys don’t require pretend play, a narrative voice or advanced motor abilities.

As my eyes scanned the available options, they landed on a toy saxophone. Not going to lie. Standing there in the toy aisle, I lost it. My earlier dreams of her playing saxophone came flooding back to me. The harsh reality of what may never be hit me like a thousand bricks. After standing there – for probably too long – weighing the over/under on if she would even be interested in such a toy, I went ahead and grabbed it and threw it in the cart.

I went home, Matt and I opened it up and handed it to her.

Here she is, her first time holding a saxophone. While still very much a foreign concept to her, her cent 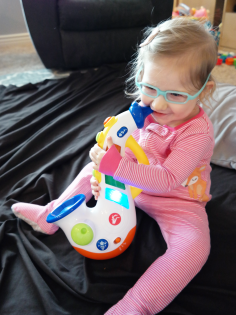 er position posture and grip are to be commended. I am a proud mama. Brought to more ridiculous happy tears to see her even slightly interested in it.

The moment was somewhat fleeting. Lasting only a short while before her hands couldn’t (or didn’t want to) hold it any longer. But she will get there, as with any child.

About the Pitt Hopkins Research Foundation

The mission of the Pitt Hopkins Research Foundation (PHRF) is to support research dedicated to finding a treatment, and an eventual cure of Pitt Hopkins Syndrome (PTHS) and other similar disorders. The PHRF is also dedicated to supporting the PTHS community with resource recommendations, parental support and the latest medical information.